This shift of focus took place against the backdrop of the emergence of an increasing number of countries in higher education and research, thus requiring more extensive knowledge and networks to build strategic partnerships. Since 2014, a number of initiatives have therefore been undertaken to establish STINT in the long term as a knowledge resource for strategic internationalisation.

Agneta Bladh, who was the government’s special investigator of the increased internationalisation of higher education institutions (HEIs), was tasked by the Board with assessing STINT’s current role as knowledge resource in internationalisation. The assessment includes STINT’s projects and activities that are primarily pursued external to specific programmes, but also potential synergy between its roles as knowledge resource and funder.

Bladh notes that STINT is currently the only actor primarily tasked with the promotion of internationalisation in higher education and research. Through initiatives taken in the role of knowledge resource, STINT has broadened this promotional role to also providing knowledge on specific topics and countries, as well as to a broader target group than researchers and teachers, and including university leaderships. The target groups of its China initiative, which may be regarded as a pilot project in STINT’s establishment as a knowledge resource, include university leaderships and researchers/teachers, but also other funders. STINT’s promotional efforts are now also influencing and driving in nature, and it currently fulfils the roles of funder, knowledge resource and policy actor/lobby organisation.

Since STINT’s adoption of its 2014 strategy, developments at Swedish HEIs have resulted in more varying and complex contacts with other countries, and specifically with countries not traditionally regarded as partners and that are still establishing themselves as knowledge nations. There is also greater focus on the importance of internationalisation in the quality of higher education and research. Accordingly, STINT’s role as a knowledge resource appears even more vital in 2020 than it was in 2014.

Overall, Bladh assess the initiatives to have been appropriate in achieving the aim of becoming a knowledge resource, but she urges STINT to develop this aspect even further, because there is a considerable need. STINT’s role as a knowledge resource is an important step in the direction determined by the Board in 2014.

STINT contributes to the development of knowledge and policy in the Swedish research landscape, but according to Bladh, its contribution to higher education and supporting university leaderships could be further developed, not least through courses on internationalisation.

“Trend analysis and strategic relationship building are important components of STINT’s role as knowledge resource. SUHF, STINT and the Internationalisation Inquiry have all noted the vital importance of increased trend analysis. STINT has made an important contribution, perhaps the most important one in Sweden,” says Bladh.

Almost two years later, the establishment of an “overseas office” is deemed to have facilitated a completely different way of working with HEIs compared to what the state research and innovation councils can achieve and STINT’s earlier efforts. STINT’s overseas office model is described as a very successful way of contributing through trend analysis and strategic relationship building on location to the internationalisation strategies of Swedish HEIs.

The initiative is also regarded as a type of “science diplomacy”, which is an important aspect of collaboration with countries with different regimes than Sweden.

In conclusion, Agneta Bladh is of the opinion that all STINT’s initiatives as a knowledge resource are positive for the sector, particularly because they are so clearly aimed at countries outside the EU/EES, and that these efforts should continue and develop, and, if deemed appropriate, developed with other actors. 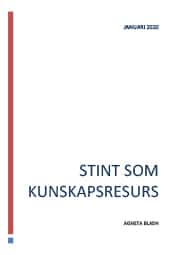 The report is in Swedish.