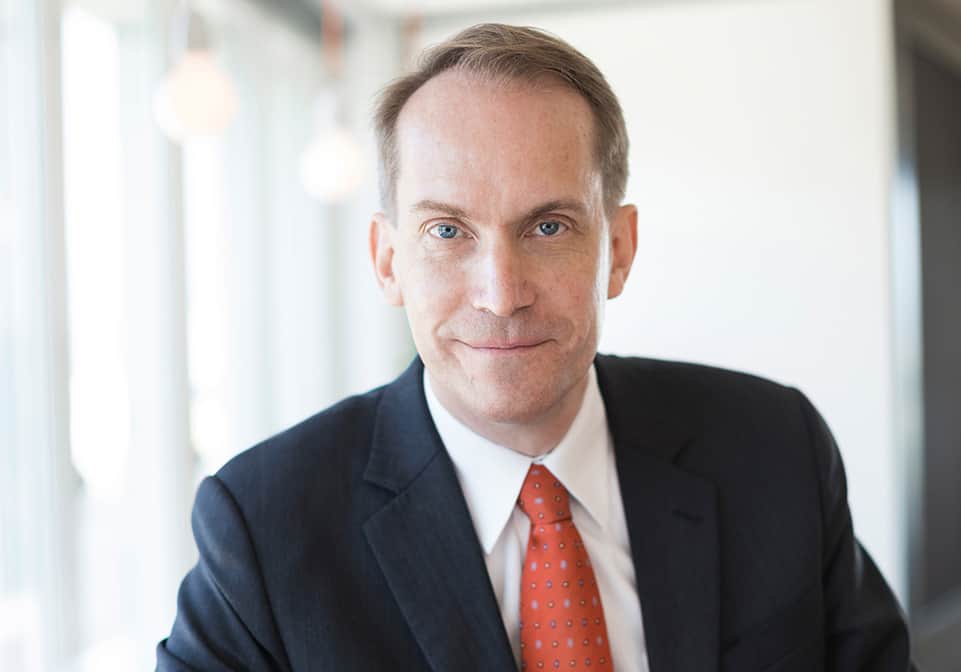 “We provide support and tools for strategic internationalisation to Swedish universities”

Internationalisation has gone from being an added extra in research and higher education to a complex necessity. Andreas Göthenberg, STINT’s Executive Director, sees both opportunities and challenges for Swedish higher education institutions.

“Internationalisation is at least as important now as it was when STINT was founded in 1994, but it has developed from being regarded as an added value into a strategic tool that needs to permeate university operations.” Andreas Göthenberg has been STINT’s Executive Director since 2009 and here he shares his thoughts on how Sweden can keep abreast of developments.

Global experience of research and higher education as well as a conviction of the value of internationalisation led Andreas Göthenberg to the position as STINT’s Executive Director.

“When STINT was founded, Sweden was not part of the EU. The Soviet Union had just collapsed and China’s economic growth had just begun,” says Andreas Göthenberg.

Developing countries that invest in education, research and innovation can develop rapidly. Today there are 37 Chinese universities among the top 500 in the world, while 35 American universities no longer make this list. A growing global middleclass is investing in their children’s education to improve their situation.

In Australia, attracting foreign students is a priority, and the country is now the third most popular study destination after the USA and the UK. Higher education has become Australia’s largest export industry, after iron ore and coal. In the USA there are also interesting initiatives. At Carnegie Mellon, Pittsburgh students can attend lectures on African business models from the university’s campus in Rwanda.

“Several good universities abroad are surpassing their Swedish counterparts as far as quality is concerned, and others are rapidly catching up. Talented researchers and students are increasingly mobile. Universities and global corporations choose their research partners form all over the world. In this context, Swedish higher education institutions cannot afford to think provincially,” says Andreas Göthenberg.

Only two per cent of the world’s academic publications originate in Sweden. Andreas Göthenberg thinks that higher education institutions have to create international partnerships and find new ways of collaborating to keep up.

“Knowledge production is global and happens across borders. Swedish universities can benefit greatly from being part of this development. At the same time, regulations preventing institutions from being international must be rectified, and this must be done soon.”

The value of international academic experience needs to be highlighted. Andreas Göthenberg underlines the importance of becoming better at attracting external talent, both internationally and nationally.

“Leading universities in the USA prefer recruiting from other universities. This means that new PhD graduates are naturally mobile. When people with different academic backgrounds are brought together, new ideas and perspectives are generated.”

Cooperation across borders inspires students and lead to new approaches and networks.

“My own choice of research direction was once affected by an internationally recruited professor at KTH Royal Institute of Technology who had graduated from an Ivy League university and offered me a very international research environment. This gave me a wholly new perspective,” says Andreas Göthenberg.

“Swedish higher education institutions have relatively many partnerships with China, but trend analysis in Sweden is rather limited compared to that of countries such as Denmark and Switzerland. I think there is great potential for development and therefore we specifically aim to enhance universities’ strategic partnerships with China.”

As a result, STINT launched a pilot initiative that includes a staff member in China and aims to improve trend analysis and strategic relationship building with the country. Andreas Göthenberg explains: “Our initiative is based on the fact that STINT has the largest programme for research partnerships with China. Similar initiatives should be started for other developing research countries as well. Higher education institutions need to find the right partners to connect to future Harvards and Stanfords.”

Internationalisation paves the way to better quality and is at least as important now as when STINT was founded. There are global challenges, and international collaborations lead to better research results. Andreas Göthenberg points out that STINT can support this development in different ways.

“STINT’s annual internationalisation index is a very useful tool in Swedish universities’ strategic planning and allows institutions to see instantly what they do well and what can be improved.”

Successful collaborations benefit from starting in time and including relevant contacts, and STINT also provides support in doing so.

“We analyse which countries show the greatest growth and can be important in future collaborations. Today there are many Asian students at our universities. Economic and demographic trends indicate that young people from many African countries will demand education in the future, and probably on a very large scale.”

In addition to the academic benefits, education and science are also important tools for building bridges. “International contacts and a broader approach play a significant role in creating understanding between countries, cultures and people,” Andreas Göthenberg concludes.